Get me outta here!

Super Junior has came back! Yes, this time they came back with 5th album 《Mr. Simple》. What does this song title actually mean? When you first saw their album concept, have you got shocked? Hehe… There are certain members who can’t accept their concept~ Who do you think he is? Let’s not waste time and have a look at the interview with members~

Leeteuk: Having the chance to come out with a new album, and having fans who love it, we feel really happy. We came back with《Mr. Simple》after 1 year and 2 months, what this song want to express is, to survive in this complicated world, the best way is to show oneself with simple mind~ People nowdays always have the thought of its alright to do their thing no matter today or tomorrow. When today is over, you will tell yourself to do it tomorrow. And as tomorrow goes by, you still have not done anything yet~ Live and think in a positive way. When you overcome any hardships, just face it with the usual self~

Sungmin: Haha… yes, the song《Mr. Simple》expresses people are currently living under pressure, this is a period where their hearts will get hurt easily. Despite all these, please just open your heart wide, face your life with a positive mind. Of course if there is good things there will be bad things too, but remember that good things happen when there is bad incident occur too.

Leeteuk: Before Sungmin sing this song, you must have had a wounded heart right?

Leeteuk: How bout after singing this song?

Q: After the release of new album, which Super Junior member’s popularity had risen?

Leeteuk: Haha… First of all I have to thank fans’ support wholeheartedly.

Eunhyuk: We went to Gangnam before, our popularity in that area is really high~ Our popularity is pretty high in Mokpo too~ That’s Donghae’s hometown~

Shindong: There are many Korean fans say that we promoted too long in outside country, so for this album, we will promote longer locally~

Eunhyuk: The comeback this time received a lot of attention from everyone, the popularity is high too, I guess this might have been because of me~

Leeteuk: Haha…really? Before our come back, we have revealed our concept photo didn’t we? In my opinion, the unique concept this time caught everyone’s attention~

Q: Which is the most simple member?

Shindong: Most of our members are simple~

Leeteuk: But I think Eunhyuk is the most simple person, because he doesn’t think a lot~ haha…

Shindong: Speaking about Eunhyuk, his face is actually simple too~

Q: Which member’s concept amazed you the most?

Shindong: Siwon! But Siwon had showed his abs many times before, so I will choose Eunhyuk~

Eunhyuk: What did I do again!?

Shindong: You are very handsome~

Eunhyuk: My abs have no difference with Siwon’s too, mine is obvious everytime~

Shindong: No~ Its been long I haven’t seen any photo that covered that much~ (NOTE: Eunhyuk’s 5th Album Mr. Simple concept photo had the most clothes on)

Leeteuk: Haha…Agree~ Eunhyuk even convered his eyes and gum, that made him look even more handsome~

Kyuhyun: But I think if the concept is unique, then you’re not supposed to wear that much~ I personally think the member with “best look” is Leeteuk and Ryeowook~

Ryeowook: Why is it me?

Kyuhyun: Ah…There’s a bit… feathers… And his concept concentrated on bottom more…

Eunhyuk: I thought the feathers on Ryeowook were pants~

Kyuhyun: As for Leeteuk, I don’t know what’s the problem~ Tying ropes around a very ambiguous body part.. I feel lucky I didn’t wear like his~

Eunhyuk: Although that’s art, but we still feel lucky we didn’t wear like that~

Leeteuk: Then will it be better if I wear Siwon’s clothe?

Yesung: Actually I would like to try that concept~ Haha~

Siwon: I think my concept is the best~ This is an of course~ On the other hand, I think Eunhyuk’s concept ain’t that bad too, he covered a lot~ Haha…

Eunhyuk: I didn’t cover a lot~ Its because you showed too much!

Q: As a member of Super Junior, what do you want to do most?

Q: Shindong wanted to reduce weight by 30KG, what is your weight now?

Shindong: I have loosened 15KG, but I am still working hard on diet! This is not a promise to myself only, but a promise I made between me and everyone else, as I have said before on variety show I wanted to loss weight~ I will work hard on this, as I still have not reach my aim yet~

Q: Who is the member that think a lot?

Sungmin: I think its Leeteuk~

Shindong: It must be Leeteuk~ He usually have many worries!

Donghae: But I think Eunhyuk has the most complicated mind, I often don’t understand him~

Eunhyuk: What? What me?

Q: What is the most heartfelt thing happened to you after becoming a member of Super Junior?

Heechul: Back in 2008, my grandfather passed away, I was performing in US that time. I immediately flew back right after I got the news, but I still, wasn’t able to see my grandfather for the last time. The members rushed to the funeral after finishing their performances, they gave me warm hugs. If there weren’t members beside me, I think there will not be any me right now exisiting.

Q: You won number one on Music Bank, talk about your feelings about it.

Donghae: Mine too. Support my drama!

Q: Who is the stingiest?

Eunhyuk: Why is it me? You didn’t treat me any meal too~

Yesung: I think its Donghae!

Q: I feel that when Siwon dance, he always look outstanding~

Leeteuk: Of course~ Our Siwon practiced really hard on dancing!

Siwon: Haha… thanks everyone~

Q: Which member want to release their own SOLO album the most?

Kyuhyun: I’m willing to take a try for it~

Yesung: Ern… Me too, but I don’t have much confident about it~

Q: Which members have an awkward relationship?

Donghae: But I don’t think so~

Eunhyuk: I think Shindong is the one that can’t get along with him~

Shindong: At a certain event~ If I’m alone with Donghae, I will feel awkward~ Yes we are close~ but when being alone with him, the atmosphere got weird~ And when we eat alone, we will end up only eating!

Leeteuk: Then you two should have more time to eat together~

Sungmin: If its me, I will choose Yesung~

Leeteuk: I think its not that you two can’t get along with each other, but dislike each other~ Wakaka…

Yesung: Not dislike, but we are not that close!

Sungmin: Still remember when Yesung, Kangin and I recorded Intimate Note? Our words that time were different.

Ryeowook: I think its Leeteuk-ssi~ He often reveal members’ secrets!

Shindong: True~ That’ why he has a nickname “(Big) Mouth Teuk”!

Q: Among the members, who’s habit you can’t stand the most?

Eunhyuk: Until today, I still can’t accept a habit of a member, that is Yesung’s. Before going up on stage, while waiting at backstage, he would pat others’ head, and acted like he did nothing~

Kyuhyun: And also Siwon. His habit is very similar with Yesung’s. When Siwon walk, both of his hand will keep swaying, and suddenly hit people’s butt, and acted like he didn’t do anything!

Q: Do you go visit your fanclub (website) and look at fans’ comments?

Kyuhyun: I have a fanclub (website) are with unknown account names, where mine and my fans’ accounts are unknown. When people comment saying that I’m handsome, I will reply with agrees~

Leeteuk: Actually, when it was my birthday, I will go to my fanclub (website) and leave a birthday greeting like “Oppa~ happy birthday” to myself.

Donghae: I can’t reply to fans one by one, and I frequently reply them. If there’s any chance for me, I’m willing to reply to them one by one!

Q: Who is the most romantic member?

Donghae: If I get married one day, or meet the girl I like, I will prepare 100m to 150m of candles, or maybe red carpet…

Yesung: Wah~ that will be so dangerous~

Donghae: Haha… Use candles to make a big big heart shape and confess. If the site is big enough, I will prepare a two-third large heart shape of the site~

Ryeowook: I think we need to lend you a hand by that time~

Kyuhyun: We have talked bout this topic before among ourselves. Donghae is a really good boyfriend, but don’t marry with him~ As a boyfriend, he will of course give you happiness, but as a husband, there will be worries~

Q: Lastly, is there anything you will like to tell your fans?

Yesung: We have came back with 5th album, we will not only be promoting in Korea, but also promote in overseas~ We will work harder and complete every promotion activity.

Kyuhyun: We hope everyone will remain like now, keep on support us!

Sungmin: I won’t make everyone disappoint, I will show you the best of mine!

Donghae: Super Junior will not give up, we will continue to work harder!

Ryeowook: When Leeteuk is in the dorm, he often get angry too, he kept worrying about us. Leeteuk-hyung, you don’t need to worry about us, we will work hard!

.:Please take out with FULL CREDITS if you want to repost the translation or picture in Twitter,blog or etc.
DO NOT modify the logo in the picture. Thanks:. 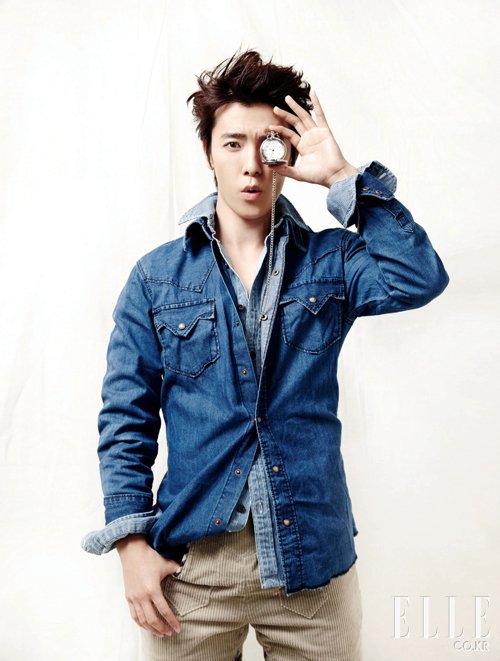